Think Negative
​By Benedikt Huttner, MD MS; Stephan Harbarth, MD, MS
GERMANY
March 27, 2017
Gram-negative bacteria cause infections including pneumonia, bloodstream infections, wound or surgical site infections, and meningitis in healthcare settings. Gram-negative bacteria are resistant to multiple drugs and are increasingly resistant to most available antibiotics. These bacteria have built-in abilities to find new ways to be resistant and can pass along genetic materials that allow other bacteria to become drug-resistant as well.
The increasing prevalence of multiresistant Gram-negative bacteria of the Enterobacteriaceae family (Salmonella, Klebsiella, E Coli) is a worrisome phenomenon. Extended spectrum E Coli strains are widespread in the community and are frequently imported into the hospital. As the Chipotle restaurant chain experienced in 2016, E. coli landed 21 people in the hospital. E.coli is a very common bacteria found in the human gut which is normally harmless. But some strains - including the potentially lethal E.coli O157 associated with several food poisoning scandals - can cause diseases in humans.
​          Of even more concern is the spread of antibiotic-resistant strains of Klebsiella from regions where they are already endemic. First detected in the United States in 1996, Klebsiella pneumoniae carbapenemase (KPC) has spread internationally among gram-negative bacteria, especially Klebsiella pneumonia. These microorganisms can cause serious infections in hospitalized patients, and there are few therapeutic options, culminating in increased mortality. In 2016, multi-drug resistant “superbug” Klebsiella hit Mahatma Gandhi Memorial Hospital in South Africa neonatal ICU, infecting 10 babies in less than two weeks. 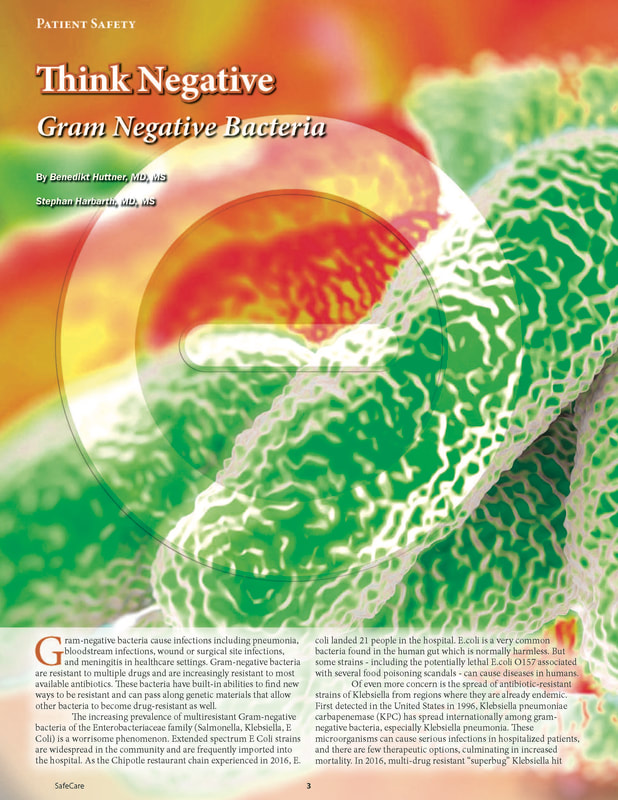 ​Antibiotic use is a main driver of antibiotic resistance, which again increases broad spectrum antibiotic use, resulting in a vicious circle that is difficult to interrupt. The present commentary highlights important findings of a surveillance study of antimicrobial use and resistance in German ICUs over eight years with a focus on Gram-negative resistance.
A past issue of Critical Care report interesting surveillance data from ICUs in 30 German hospitals, based on a large amount of microbiology and pharmacy data gathered between 2001 and 2008. One of the main study findings is a decreasing rate of Methicillin-Resistant Staphylococcus aureus (MRSA) and a dramatic increase of third generation cephalosporin antibiotic resistance Gram-negatives over the study period. In recent years, most European countries have succeeded in reducing the burden of disease caused by MRSA. This progress has, however, been partly offset by the increase in the prevalence of multiresistant Gram-negative pathogens.
We confirm this worrisome finding and also shows an increase in carbapenem, third generation cephalosporin and fluoroquinolone use in German ICUs with a stable volume of overall antibiotic use. The latter two antibiotic classes have been repeatedly identified as risk factors for carriage of multidrug resistant Gram-negatives. Carbapenems on the other hand are first-line drugs for the treatment of infections of Gram-negative bacteria. It is tempting to assume that overuse of fluoroquinolones and third generation cephalosporin antibiotics contributed to the observed increase in Gram-negative bacteria, which subsequently increased carbapenem use.
The ecological nature of the data, however, makes it difficult to infer clear cause-and-effect relationships, as does the failure to differentiate between hospital- and community-acquired isolates and clinical versus surveillance cultures. In addition, the analysis of trends is hampered by variation in the number of participating ICUs over time. Nevertheless, the increased burden of multidrug-resistant Gram-negative bacteria is a real phenomenon.
In contrast to MRSA, Gram-negative bacteria - notably strains of E. coli - are mostly imported from the community into the hospital.
Assuming a relationship with antibiotic use in animals and subsequent transmission of antibiotic resistant E. coli via the food chain is alluring, but strong epidemiological evidence is still lacking. Transmission of Gram-negative organisms within families might also contribute to the spread. The recently started European Union-funded SATURN project (Impact of Specific Antibiotic Therapies on the prevalence of human host Resistant bacteria) will gather more information on these risk factors.
As mentioned above, antibiotic overuse in humans probably plays a central role in the spread Gram-negative bacteria. In the context of this study it is noteworthy that Germany has a relatively high level of fluoroquinolone use in the community. As to antibiotic use in hospitals, the overall quantity of antibiotic use in German ICUs is comparable to that of other countries. What about the quality of antibiotic prescribing? Although there is important heterogeneity between ICUs, inappropriate antibiotic use is still common in Germany (as in many other countries), where infectious diseases as a stand-alone specialty and antibiotic stewardship programs are still underdeveloped.
Compared to other European countries or highly publicized health threats, such as bioterrorism and swine flu, public awareness and political commitment to control multidrug-resistant microorganisms has been slow to rise in Germany. Only recently (2009) has a German reference center for surveillance of Gram-negative bacteria been established, which focuses, among other things, on detection of carbapenemase producing bacteria.
A first outbreak of carbapenemase producing Klebsiella pneumoniae in Germany has recently been reported, probably linked to an index patient with previous healthcare contact in Greece. The fact that two ICUs in 2008 reported carbapenem resistant K. pneumoniae in the current study raises the concern that these strains might already be more common in Central Europe than previously assumed since detection of these strains may be difficult with routine laboratory techniques.
How can we control the rise of multidrug-resistant Gram-negatives? The growing community reservoir makes it unlikely that we will be able to control the spread of Gram-negative bacteria by conventional measures targeted at nosocomial infection control. The promotion of prudent antibiotic use in the community and animal husbandry should therefore be a key priority. Early identification of these strains and aggressive infection control measures seem essential. Examining novel decolonization strategies for Gram-negative bacteria might be a further strategy worth evaluating.
​          If we manage to enforce all these measures, we will hopefully be able to think positive again - even with regard to Gram-negatives.
Unless otherwise noted, you can republish our articles for free under a Creative Commons license. Here’s what you need to know:
FEATURED