Yisrael M. Safeek, MD, MBA, FACPE
​August 29, 2018
The Patient Protection and Affordable Care Act, often shortened to the Affordable Care Act (ACA) or nicknamed Obamacare, is a United States federal statute enacted by the 111th United States Congress and signed into law by former President Barack Obama on March 23, 2010. From all the media accounts, healthcare gurus and hospitals alike did well financially after Obamacare was enacted.
It even seemed that Obamacare cultivated a new class of the rich - millionaires and billionaires in the healthcare industry. Even Forbes magazine celebrated the blessings with a cover story called “Obamacare Billionaire” featuring Cerner’s CEO Neal Patterson’s rise to the billionaire’s club. In fact, reading the glowing reviews of in mainstream media, it seemed that Obamacare not only promised growth of rural healthcare, but also delivered sustained abundance of never-before-had good health.
So, when our staff recently shared a US Senate report going back to October 21, 2015 called “Obamacare Crushing Rural Hospitals”, we were surprised. It seemed that the government knew Obamacare was bad medicine for close to 60 million Americans that depend on rural hospitals. This was a mere five years after the blessed event of 2010. A year earlier, a 2014 Stanford study concluded that “one year after the launch of Obamacare, some rural residents face significant disadvantages.” Looking back in 2018, there were more rural hospitals closure since 2010 than in recent healthcare history. 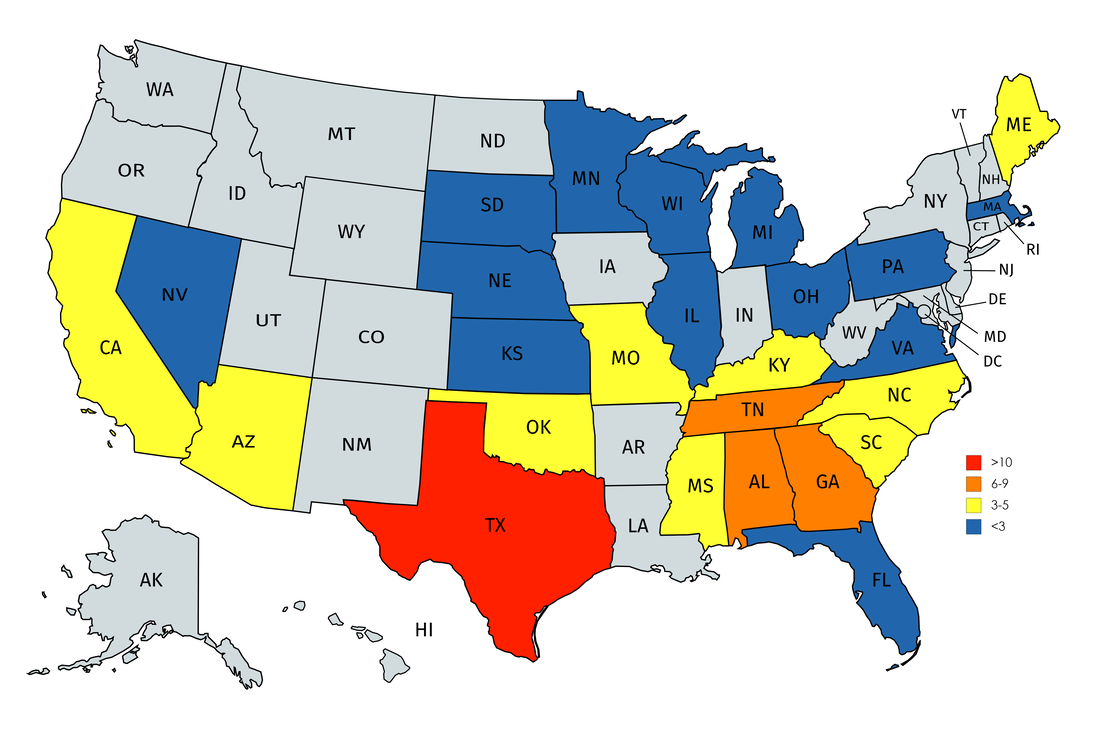 Against the backdrop of the American Medical Association, June 15, 2009, former President Obama remarked: "I know that there are millions of Americans who are content with their health care coverage — they like their plan and, most importantly, they value their relationship with their doctor. They trust you. And that means that no matter how we reform health care, we will keep this promise to the American people: If you like your doctor, you will be able to keep your doctor, period. If you like your health care plan, you'll be able to keep your health care plan, period. No one will take it away, no matter what."
Well, we know today that most of those words were just empty promises of national healthcare “reform” put together by liberal Northeast academics and socialist Midwest economists. The truth of the matter, under the plan “if rural people like their doctor, they were not able to keep their doctor”. Obamacare represented a bait-and-switch perpetrated on the American people by elite liberals and socialists.
Indeed, when Obamacare became law, rural hospital closures had tapered off, and was on the decrease. After Obamacare, the rate of rural hospital closures increased dramatically. So, as they say, "Use a picture. It's worth a thousand words” (Figure 2).

At the root of the rural hospital closures epidemic is the hospital-crushing weight of Obamacare regulations associated with excess financial burden from: 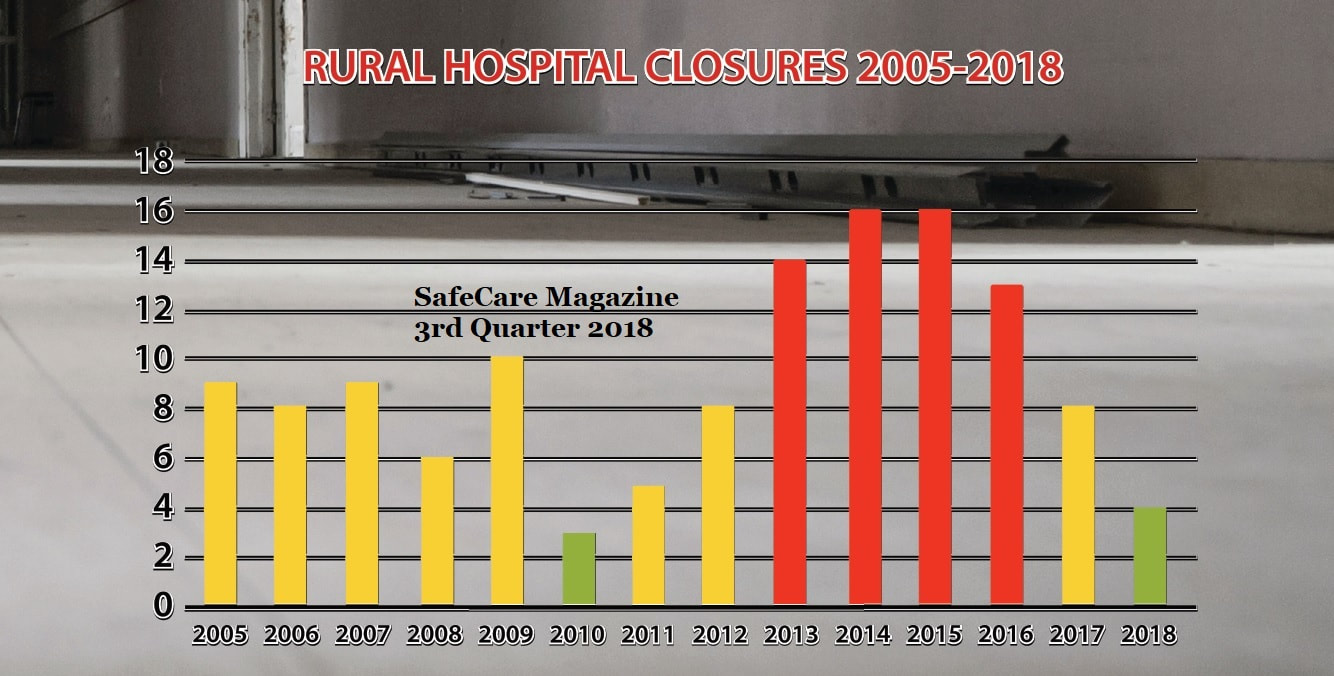 Obamacare also shifted money from providing reimbursements for rural hospitals to covering the cost of insuring people via the Medicaid expansion. Apologists of the “reform” point out that states that expanded dependency on the government program saw their rate of closures decline. And, that it was the so-called “nonexpansion” states that failed to expand Medicaid which suffered a significant increase in hospital closures stemming from caring for a greater proportion of uninsured patients without the corresponding increase in revenue. Never mind a Chartis report that stated 36 percent of rural hospitals in states that expanded Medicaid had a negative operating margin in 2015. These hospitals must have been pounding Obamacare money down the rat hole.
Similar to lack of lifeboats during the Titanic disaster, Obamacare defenders cannot explain why there was not any financial planning by the “reform” architects to address the burden of funding for “nonexpansion” states. In addition, they also are unable to explain why rural hospitals were not exempted from Obamacare’s novel admission standards that drastically drove down insurance reimbursement. And, what of the fact that rural hospitals did not get the intended benefit of more people with insurance, as promised.
In 2015, Republican congressman Sam Graves introduced H.R.3225 - Save Rural Hospitals Act to increase payments to rural health care providers under the Medicare program. Among other provisions:
(1) Reverse cuts to reimbursement of bad debt for rural hospitals;
(2) Delay the application of penalties for a rural hospital's failure to become a meaningful electronic health record user;
(3) Make permanent increased Medicare payments for ground ambulance services in rural areas;
(4) Amend the Balanced Budget and Emergency Deficit Control Act of 1985 to eliminate Medicare sequestration for rural hospitals;
(5) Eliminate disproportionate share hospital payment reductions for rural hospitals.
(6) Amend the Public Health Service Act to authorize several competitive grant programs to assist eligible rural hospitals.
In the same year, GOP Senators Grassley and Gardner offered up another potential solution with the introduction of the REACH Act—the Rural Emergency Acute Care Hospital Act. This bill was intended to increase Medicare payments to specially designated Rural Emergency Hospitals. Sadly, neither piece of legislation gained any traction in the 2015, but Congress allowed Obamacare to take away the hospitals of millions of rural Americans, cheating them out of receiving timely and safe healthcare.
Sheps Center for Health Services Research at the University of North Carolina data between 2010 to 2017 paints a sad picture of deprivation of healthcare for millions of rural Americans. Eighty-seven (87) rural hospitals closed since 2010, the start of the “reform”. For the period between 2010-2017, rural hospital closure averaged 11.4 hospitals per year with a whopping closure of thirty two (32) hospitals in the years 2014 and 2015 alone.
​          In the President’s weekly address, June 6, 2009: former President Obama promised, "If you like the plan you have, you can keep it.  If you like the doctor you have, you can keep your doctor, too. The only change you’ll see are falling costs as our reforms take hold." Sadly, again, these were just empty words, even though well meant. Even as healthcare fat cats were cashing in, the cost of healthcare went up astronomically under Obamacare. This was especially true for rural communities which saw premiums increased (by as much as 100% in some communities), even as they lost their often only source of healthcare to closures.
It is truly sad that such misguided policies led to the grievous plight of rural America. This is one sick legacy of Obamacare that has not been given the proper coverage it deserves by the national media. Now that President Donald Trump is aiming for “repeal and replace”,  Obamacare apologists are trying to protect their healthcare “reform” by claiming tens of millions would instantly lose health coverage. These “reform” defenders continue to lament the dire consequences if the “reform” were repealed, alleging thousands of unnecessary patient deaths. In their haste to criticize, they are ignoring how the “reform” is killing people right now.
Since 2010 the year of Obamacare, there are more shuttered hospitals in rural communities. In fact, poor rural Americans would be ill-advised to have a heart attack, or stroke, or sepsis. With hospital closures, their odds of mortality increased by 15 percent for heart attacks, 10 percent for strokes, and by 8 percent for sepsis according to the American College of Emergency Physicians. If the mission of the geniuses responsible for Obamacare was to destroy rural hospitals, and maim rural Americans, they succeeded beyond their wildest dreams.
Unless otherwise noted, you can republish our articles for free under a Creative Commons license. Here’s what you need to know: